Scottish Group have been involved in assisting Stirling Council following the activation of the Forth Valley Local Resilience Partnership.
I was invited to attend in my role as chair of the voluntary sector group and IRC
Teams meetings would be held twice a day (11:00 & 17:00) and reporting outcomes to Scottish government operations Room (SGOR) and ministers three times an day. SGOR is the equivalent of COBR in England
A request was put out to suitably qualified group members asking for availability when a red weather warning was issued for Storm Arwen. This was to affect the east coast from Northeast Scotland to the Scottish borders and North East England.
3 were unavailable due to work, 2 unavailable due to holidays the remaining confirmed availability.
The full LRP was stood up on Monday29th. Two meetings were held using teams, the area affected was huge, North of the town Callendar and west of Glenrothes, it was decided to use local teams to provide initial assistance. Trosachs Search & Rescue and Killin MRT were mobilised.
Following the second meeting on Tuesday (17:00) it was decided by the LRP that more voluntary sector deployment was required. IRC Members were sent an SMS and followed up by phone call (approx. 17:30/45) to attend the office asap. 5 arrived at office by 1845, 1 called off. Due to a non-arrival it was decided to leave at 19:15 with those present.
ISUZU 4 x4 and R 999 SCU ambulance make way to McLaren Sports Centre Callendar where the Coordination centre was located.

Arriving at location at approx. 20:00 Isuzu first on site, tasked to Invertrossachs Road to check on occupants of homes along the road as far as the Loch. R999SCU arrived as Isuzu were leaving. 8 homes were visited, all were found to have power and occupants safe and well.
A very large tree (3ft x 20ft) had fallen across the road but due to being caught up on others opposite it was possible pass underneath. Higher vehicles would not.
On returning to Control the only persons on scene were Stirling council rep and R 999 SCU crew (2) who were being held in reserve for emergency calls. Both vehicles left Calendar at approx. 22:30 returning to office at approx. 23:15.
Wednesday 1st Following the 11:00 teams meeting the number of homes affected had fallen from 359 to just over 100 a request for volunteers to attend the sports centre for 14:00 to visit outstanding homes for vulnerability checks. As we had a 4 x4 we were assigned a postcode area to check this consisted a single track road along which a number of private homes and farms were located. 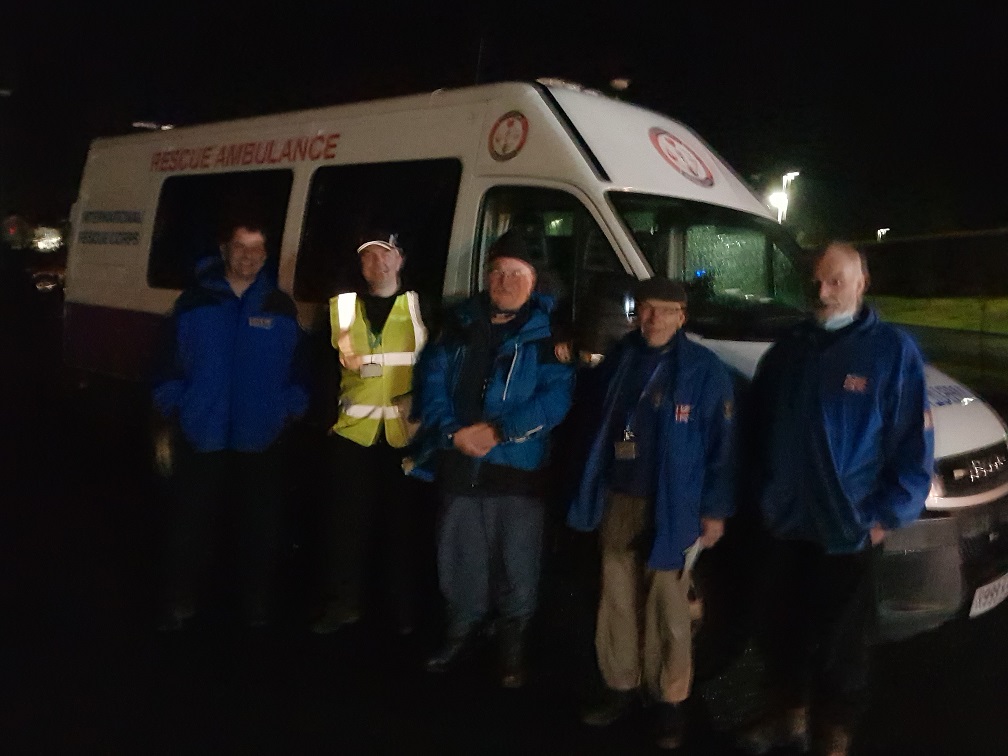 A brief was given by Stirling Council resilience officer and police radios issued to all present Working alongside SFRS, Killin MRT TSAR and S.A.S first responders we left at approx. 15:00 hours completing our task returning to control at approx. 17:00 . While at control and signing out we were asked if we could jump start an MRT vehicle who had broken down. It was on our route home and this was done without issue, returning to Grangemouth approx. 18:00.
A further meeting was scheduled for 11:00 on Thursday 2nd, this was cancelled and the LRP stood down. Overnight power had been restored to all but 3 homes.
Miles covered by both vehicles 160 miles +
No equipment used