Barbara Colling is a 68 year old lady who went missing on Monday 28th January 2013 from her home in Helmsley, North Yorkshire. Barbara suffers from Alzheimers but regularly went for a daily walk usually around Helmsley.
Barbara had not been seen since 0935hrs on Monday 28 January 2013, in the area of the B1257 at Abbotts Hag, near the Rievaulx Moor. She is described as white, 5ft 6in tall with a medium build and medium length blonde hair. When she was last seen she was wearing a navy blue jacket, blue trousers, a black woollen hat with ear flaps and black boots and is thought to have been carrying a black rucksack. She did not have access to money or debit cards.
North Yorkshire Police immediately put out several bulletins in the media asking if anyone had seen her. Several unconfirmed reports stated that she had been seen walking up the B1257 Stokesley road as far as Laskill House (about 5miles north of Helmsley)
Thursday 31st January
On Thursday, following further reports in the media, IRC telephoned North Yorkshire Police offering our help. We were instructed to speak to the PC in charge of the search based at Helmsley Police Station. He informed us that we were very welcome to come along to help in the search that afternoon.
It was decided we would send a small team of 3 – Julie Ryan, Dean Mills and Ray Gray to Helmsley Police Station.
At approx. 1400hrs Julie Ryan arrived and had a brief with the PC who explained which search teams were still currently searching. In the meantime one of the 3 members of the small team Ray Gray, was unable to continue due to having car trouble.
We were instructed to make our way to a car park on Newgate Bank viewing point – we were to meet with the Cleveland Search & Rescue team – we were to search the wooded area to the west of the B1257.
At approx. 1500hrs the remaining 2 members (Julie Ryan / Dean Mills) headed down the B1257 to pick up the footpath at Snilegate Head Farm.
The path took us into a large wooded area and as there were only 2 of us we were unable to do an effective line search – we searched a small gully area then made our way on the path through the wood. We kept to the well defined path looking on either side. The path went all the way through the wooded area and eventually it emerged back onto the B1257. We returned to base as darkness was falling at 1630hrs. We showed the MR team where we had searched and then spoke to the PC who had made his way to the temporary command post. We told him that we had a team able to assist over the weekend and asked whether the police would like the team to do any further searching. This offer was accepted and we told him we would be back to the temp command post at 0800hrs and be able to search until approx. 1300hrs on Sunday 3rd Feb.
Search Team
The IRC Team:-
• Julie Ryan – Team Leader
• Ray Gray – Base Camp Coordinator
• Tony Conner – Base Camp Coordinator / Team Medic

The team (except for 2 members who would join us on Sunday) were briefed on Saturday evening at 2000hrs.
Sunday 3rd February 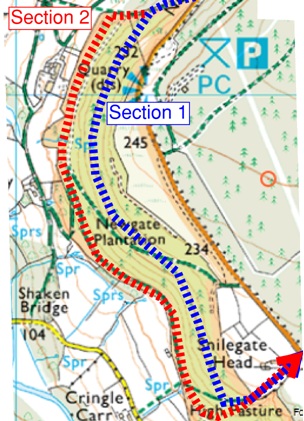 The team made their way from the National Stores at Easingwold to the same car park as before (Newgate Bank viewing point) and arrived at 0800hrs.
We had 3 areas to search but only if we had enough time.
The weather wasn’t great – it had snowed overnight and there was a biting -5C wind.
At approx. 0810hrs all team members set off to search area 1 – the intention was to search the wooded area west of the B1257 starting at grid ref SE 564 893 (OS map Landranger 100 Malton & Pickering). Julie and Dean had only searched the paths so the total area needed clearing.

The first search area was a steep gradient and heavily wooded area. The two teams were split across the whole gradient in to 2 sections and completed a thorough line search through the area (as above)
The search continued with nothing was found. The search of this section finished at approx 1115hrs.

11:30hrs we returned to search an area on the opposite side of the main road to before (the same side as our base camp). The team took a short cut through the back of a farm once the farmer had been asked if it was okay going through his farm. We passed through a couple of sheep fields on route checking all the hay bales were clear. 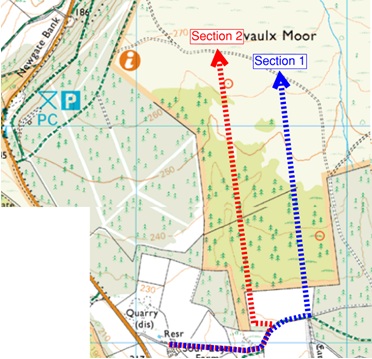 The team leader and 2 section leaders worked out where the area was we needed to search next, and we looked at the ages of the different trees to work out how newly planted they were which indicated where a clearing between two woods used to be. The wood mainly consisted of Pine and Silver Birch species, with uneven, boggy terrain and mature heathers, as we moved to the end of this section there were a number of small ditches running across the area. The Team members were spread about 15 metres apart and continued to line search the wooded area at grid reference point of SE 5770 8826 on a bearing of 350 degrees. This was going across marshland and dense wooded areas.
Contact with team members and base camp was continued via IRC radios but nothing was found on this search.
The final area we searched was a small section of moorland that had either been cut or burned short.
The weather conditions were very cold with the odd patch of snow underfoot and very windy out on the moorland.
Nothing was found.

13:45hrs the team returned to base camp and was greeted with a hot drink.
Due to time constraints we were unable to search the 3rd area recommended by the PC.
1350hrs we set off back to stores in Easingwold.
14:35hrs we arrived back at stores safely and cleaned off the kit and ambulance.
The admin office and NYP were informed that we had completed 2 searches and nothing was found.