Search for Shaun Ritchie Age 20 – Last seen between Strichen and the A98 Fraserburgh to Banff road on the night of Friday 31 October 2014.

On Saturday morning 8th November, having become aware that local people had taken part in a search on previous days, I made contact with Fraserburgh Police to ask if they were still searching for Shaun and if they would like another volunteer. My offer was accepted and I was told to report to Boyndlie hall for 09:00. I then contacted Rab to inform him that I had volunteered as part of a civilian search team and to ask if I could officially represent the Corps on the search. I was given the go ahead. 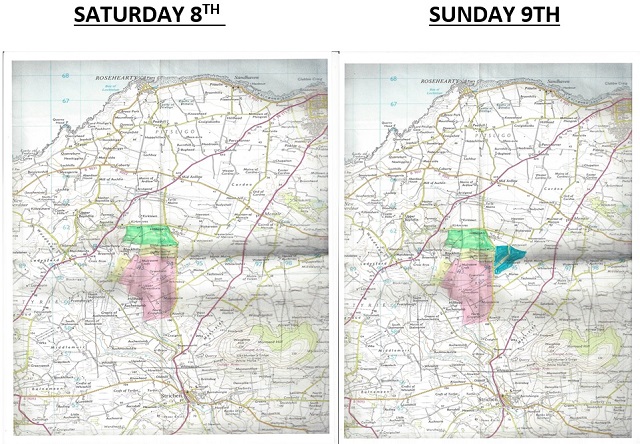 On arrival at Boyndie Hall I was briefed by police and was given the job of organising the civilian search team of over 50 civilians. 5 police officers accompanied the search team.
The searchers were divided into two teams.
Team 1. Searched area in Green.
Team 2. Searched area in Yellow.
(Maps to the left)

The two civilian teams worked very well and covered a large area. It was good to see the enthusiasm and eagerness to continue with the search.
At the end of the day I was asked by a Police Sergeant what IRC’s capabilities are. I gave him a breakdown of our equipment, man power, skills and qualifications. He then spoke to the Inspector and put forward a suggestion that a formal request for assistance from IRC be made for a team for Sunday. I was then contacted by the sergeant and asked if IRC could supply a team to assist in the search.

The call was put out to operational members by John Wilkinson by text message via mobile phone. About 18:00 I received a call to say that a team of four were to be mobilised- Dean Mills from Yorkshire, Gordon McTavish from Eyemouth, Rab Barrie from Grangemouth and myself, John Anderson from Fraserburgh.

Civilian team members numbered about 30 with 2 Police Officers so we worked as one team covering a large area of stubble fields, hedge rows and burns. The weather on both days was sunny and mild.

Sunday’s search was concluded at approximately 16.30 due to failing light and the police thanked the team for their assistance.