All times are approximate.

At 10:30 a call was received on *FVLRPVSG single point of contact number, from Falkirk resilience officer (Formerly emergency planning). Asking if the VS could assist with a flood situation at Dunmore village located on the south bank of the Firth of Forth.

Initial Information, that a home was in danger of being compromised. Sandbags had been delivered to the location but there was no manpower to distribute them. The main road (A 905 Airth to Stirling) was under approximately a meter of water for 200 to 300 mtr at Dunmore making access difficult.

Due to this information, the task was passed to Lothian 4×4 response. With the information that vehicles with wading capability would probably be required. L4x4r called back to say they were having difficulty finding members to respond but would try and deploy a vehicle to assess the situation.

As the location is approximately 8 miles from the IRC office, I contacted John S Anderson, & Jim Livingstone , we had only just left admin office a short time before the call was received, Both were still at Johns house, I collected them at approx. 10:50 and we travelled to the site using my 4×4. The journey to Airth was straightforward, but on leaving Airth, several sections of road were under flood water, passable with care.

On arrival at Dunmore, we found the road to be under at least half a meter of water just past the entrance to the village and for the 200/300 m reported. A minibus/taxi had been abandoned in the middle of the flooded section.

The first house (Woodlee) had sandbags positioned at the doors and garage, the water was well below that level, the driveway was thigh to waist deep. This was due to a dip in the long driveway. Walking down the road into the village other properties affected were all on the same side (North west) as Woodlee, one being seriously affected (approximately 1 m of water). Three high volume pumps had been set up by Falkirk council, one of which was in that homes drive. Not all properties in the village suffered water damage.

A member of L4x4r arrived at approx. 11:30/45 he was updated on the situation. While on site it was apparent that the water levels were dropping quickly.

Next high tide would be looked at with consideration on deploying a team to lay sandbags if required. This information was passed to the Resilience officer We spoke with homeowners and passed on contact details for Falkirk council should they require assistance, accommodation etc… I was told by the worst affected homeowners they had several offers from neighbours and family members to house them.

The biggest issue was members of the public removing road closures and attempting to drive through the flooded area. Most turned back on seeing the abandoned vehicle but those with 4×4 still attempted the task as did several LGV’s.

It was decided that there was nothing further IRC could do for the present, so we informed the L4x4 member and those that required the information. We left for Grangemouth returning at 12:30 approx. 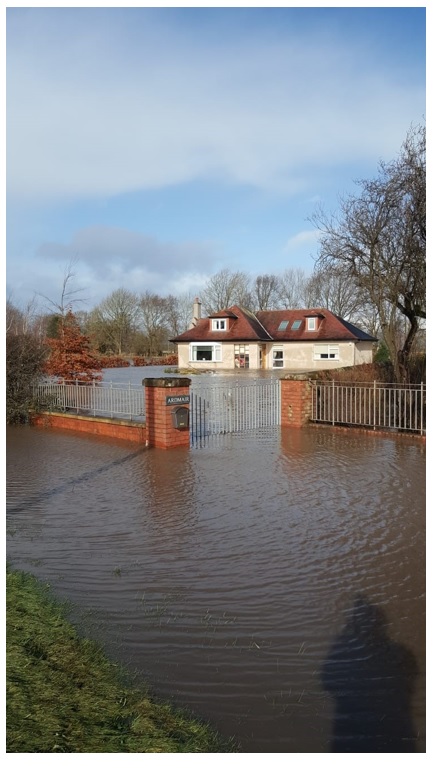 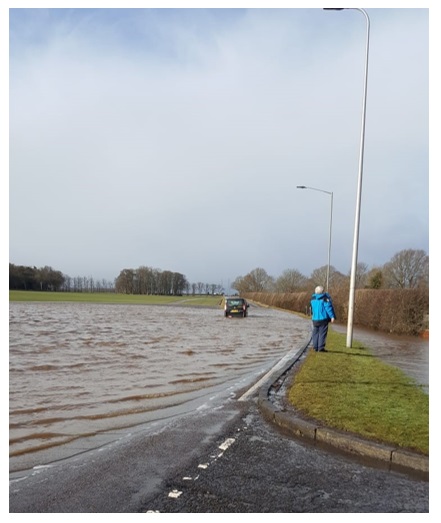