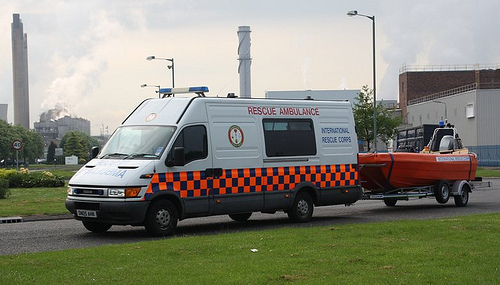 19:37 – A call was received by Central Scotland Fire & Rescue Service from Scottish Ambulance control informing them that a male had attempted to swim across the loch and was now missing.

20:16 – A call was placed to Willie McMartin requesting if IRC would attend.

20:19 – Call placed to Admin and informed to start mobilisation to incident.

20:22 – A further member picked up when passing with boat.

21:20 – Following consultation with the Incident Commander and others it was agreed that a suitable launch site was located approximately ½ mile down the loch side. Two team members go to recce this.

21:30 – The boat was moved to the new location and the IRC ambulance was informed of this site. They arrived within 2 minutes with a further two members. The boat was launched and would proceed back to the scene. The crew would be 4 members. One member returning by road to liaise from the shore and a further member remains at the launch site with the ambulance.

21:55 – IRC boat crew, using an Aquascope, report a sighting in approx 6m of water. The sighting will require full confirmation, but is being treated very seriously. The boat was unable to hold station due to wind and current so will relocate.

22:28 – Casualty location confirmed as the crew have fully described his clothing and position to the satisfaction of the senior police officer. A police dive team will recover the body.