Following the disappearance of a Withernsea woman, an offer of assistance to take part in a wide area search was accepted by Humberside Police and an IRC search team assembled to search the following day. Following a police briefing at Withernsea Hospital on Thurs 28th July, the team of 6 members were asked to search gullies, ditches and the cliff edge around the Waxholme Road area, while members of the public completed a line search of the fields under supervision of the police. An IRC rescue ambulance was kept in attendance throughout the search. 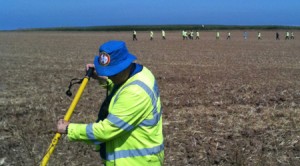 On Wednesday I was contacted by a PC from Humberside Police and asked if we could provide a team to assist with the search the following day.

Tony Conner and Julie Ryan attended stores on the morning of the 28th to assist Kevin with the loading of the van.

The following team were mobilised for the search on Thursday.

Thursday 28th July
11.30. All personnel had arrived at my house with the exception of Gordon who was to meet us on site. Set off in two vehicles (Northern Ambulance and Willies 4×4) and arrived at the designated police rendezvous point of Withernsea Hospital in the Town of Withernsea at 13.00hrs for a Briefing.

Missing Person is Marlene Wagstaff, 77 Years Old and suffers from Alzheimer’s. She has been missing since 14.00hrs on Friday 22nd July. Went out from her home in the village of Hollym and did not return.

The last known sighting was in Waxholme Road (some two and a half miles from where she lives and just outside of Withernsea) on Saturday 23rd July at 16.00hrs. At 13.30 hrs we were asked to report to Waxhlome road (to the east of the town centre and split into two groups of three to assist the two teams who would be searching the area.

On arrival Kevin, Gordon and I joined one team and Willie, Andy and Ollie joined the other. The teams were made up of Police officers and members of the public. To the right of Waxholme Rd was a large field which stretched from the road to the cliff top edge on the coast. While the main team line searched the area we were asked to check all of the gullies, ditches and the cliff edge. This we did in teams of three and eventually finishing up at a house called Branley Hedge at 16.00hrs.

When this was completed we returned to Withernsea police station to be retasked. A discussion with the police then followed and we returned to the rest of the team. Following a brief meeting with the team we decided to stand down and return home.