After more than two months of rain and storms, much of the county was under water and on Saturday 15th Chertsey Flood Helpline were asking for Hi-Vis jackets and people to patrol the areas flooded. John Wilkinson contacted the Help Line and offered IRC assistance which was accepted at 11.45am. 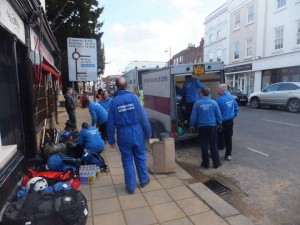 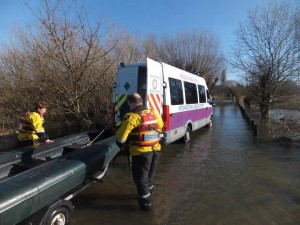 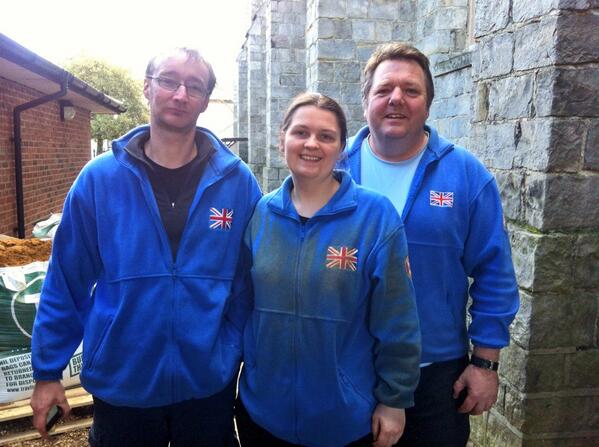 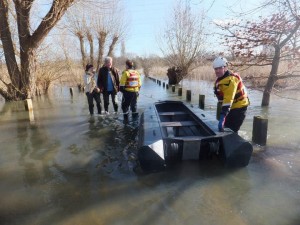 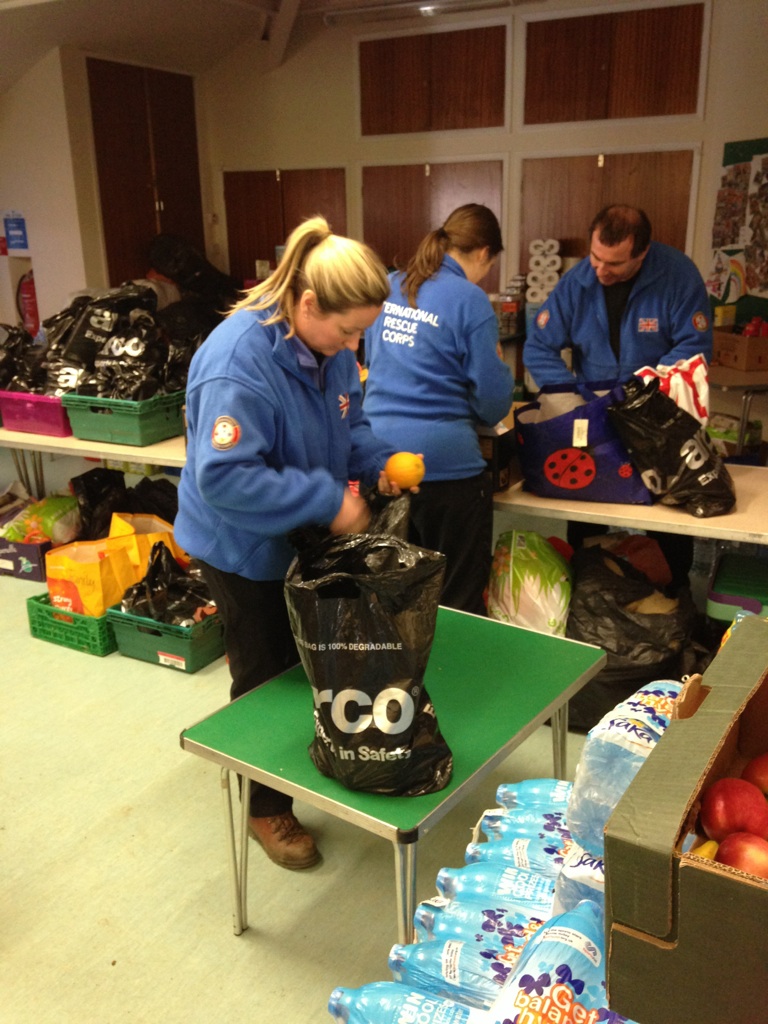 All times are Approximate.

Some IRC members were already at the stores as there was training taking place and 11 members stepped forward to take part.

The team set off from the store at approx 1330hrs – Equipment included the northern ambulance with trailer and a second vehicle towing the Zegul on the trailer.

When the team leader and coordinator arrived at St Peters Church, Chertsey at 1800hrs they immediately introduced themselves to the flood team. They detailed the Corps resources and experience to the coordinator for Chertsey Flood Helpline, a representative of the Environment Agency and a Councillor from Runnymede Council.

The Corps team began helping with the unloading of a lorry load of sandbags. The IRC ambulance appeared shortly after and the complete team continued in the unloading – the sandbags were unloaded by 1930hrs.

The team leader and coordinator went to the flood team control room and it was agreed that the Corps should stay in the church hall and look after the security of the building they also requested that the Corps team could check on some residents who had been stranded following the flooding earlier in the week.

A team of 4 were sent to do a security check on some vulnerable residents. The team departed in the ambulance to carry this out at 2100. The ambulance team arrived at 2120hrs and commenced their reconnaissance. At 2209hrs they had completed the reconnaissance and radioed to say they were on their way back to the church hall.

At 21.30hrs Surrey Fire and Rescue contacted the Corps and informed them that the team details had been passed from Surrey police. Following some discussions and a debrief everyone stood down for the night but remained available if required.

16th February 2014
The Corps team was up at 0600hrs and following breakfast the trailer was emptied of all kit in case the flood team wanted help to co-ordinate and transport the huge numbers of donated food, clothes, water and toiletries to a local storage facility.

The flood team arrived at 0900hrs and began a search for local storage facilities and for any further actions required.

The Corps was asked if it was possible to take the boat with a local councillor to his flooded home to help him get to the property and collect some personal effects.

A small team was sent in the ambulance and the Zegul (boat) was taken as well. Two other local residents also travelled with the team. The water deepened so that the ambulance was unable to pass so the Zegul was used to make the rest of the way down to the house. The householder gained entry to collect possessions. This was completed and the group returned back to the ambulance at 1215hrs. All returned to base by 1235hrs.

Between 11.00hrs and 12.35hrs the rest of the team assisted with cleaning the church hall in which the Flood Helpline was located and also assisted to pack food parcels ready to be delivered if required.

Following some discussion with the flood team the Corps was asked to help organise the donations into their relevant areas, pack them into bags and put them onto trolleys.

Once the parcels had been organised the Corps would head home. The team left Chertsey at approx 1500hrs and arrived back at stores at approx 2000hrs. Everything was unloaded and the team were stood down. All members were Home by approx 01.00hrs