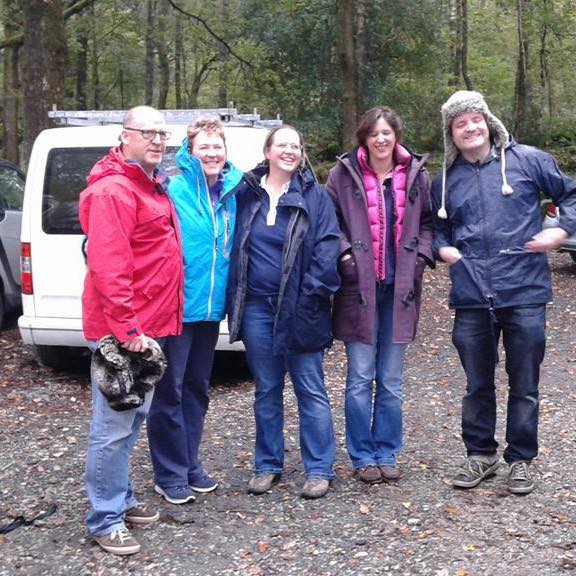 On October 4th 2014, Julie Ryan, who is a member of IRC, was supporting her cousin, Rob Martin. Rob Martin was swimming Coniston Water in memory of his wife Jane Frances Martin and another cousin, Jane Egan, who both died of Ovarian Cancer 20 years ago this year.

International Rescue Corps were also supporting this event by doing the boat support cover on the lake. 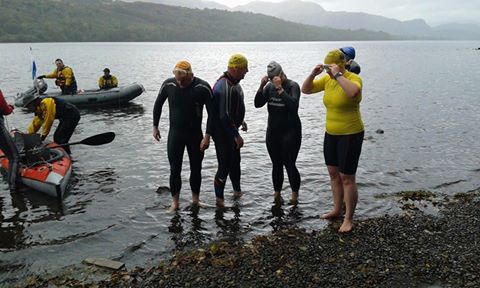 This is what Julie had to say about the swim.

As I stood in my swimming costume in the pouring rain on the banks of Coniston Water I looked up the lake and prayed. I prayed to Jane Francis Martin – ‘Please look after us Jane?’ I was joined by the other swimmers (Rob, Mike, Philly & Pru) all in full body wetsuits, and, as we stood ankle deep in the lake, we posed for photos. An excited yet worried set of relatives and friends wished us luck and with a rallying ‘C’mon!’ we set off!
The kayakers soon joined us with a rescue inflatable rib spluttering its engine into life pottering on behind. As soon as we started swimming Rob was struggling. He was said he was struggling to breathe properly as his wetsuit was choking him! I swam over and pulled open his Velcro collar and zipped down the suit. He settled down and within 5 minutes the rain and wind stopped and the sun came out!! The water was warmer than I had expected and relatively clear and proved to be a lovely lake to swim in!
Rob still continued to battle with his emotions and kept stopping to take stock of the situation. An hour passed and the friends and relatives following the swim from the shore kept appearing on the bank to shout encouragement and wave at us. I spotted a yellow buoy and told everyone to head to it – once there we had a break – John and Tony in the rescue boat handed each of us a lovely warm plastic cup of coffee and some jelly beans!

We didn’t stop long and headed off again. As we swam further down the lake we were joined by the lake’s steam gondola. We waved to everyone on board and got waves back and a blast of the boats horn! We all cheered. Despite the sun, squalls of wind and rain would come in and at one point we were being blown to shore so I decided to head everyone across the lake. By this time I could see the white masts of the yachts at the yacht club in the distance and Tim and Lynne, the 2 kayakers, had word from friends and families at the Bluebird Café over the radio that they could see us in their binoculars!

Rob was still struggling and continued to cough and splutter on occasions. At one point he looked quite grey which began to worry me and the rescue boat crew. As we cajoled each other on, I looked up towards the Old Man and a beautiful rainbow appeared from the mountain to the water. As we hit the 2 hour mark I could see the Bluebird Café’s roof so I knew we were nearing the end. We stopped again for another hot drink in the middle of the lake – at this point I started to feel the cold and had a little shiver. I knew we shouldn’t stop for long so I shouted to everyone to stop talking and get moving!

As we neared the Bluebird, we could see lots of people stood on the pier watching our progress. I could feel them willing us to finish. Then Rob stopped swimming – I looked around and asked him if he was ok? “I can’t swim and cry at the same time’ came the reply! I calmly said that if it was a choice between swimming and crying at that moment in time I think it would be best to swim.

We soon neared the pier and were instructed to finish on the other side of the pier where the stone jetty was – this would make it easier to get out! The other 3 swimmers and I lagged behind Rob and let him finish the swim first – we hollered along with the friends and family ‘C’mon Rob!!’

As Rob emerged from the water, he struggled to stand up – Mike and I waded to his aid and helped him stagger to the arms of people stood on the shore. He was spent, he had given everything after taking 3 hours 4 minutes to complete the job!!

It was all very emotional and a fantastic feat by Rob and the others but not possible without the people who managed the craft stall at the Bluebird Café, the drivers, the people who lugged equipment to and from the ambulance, the ones who got us warm afterwards and the ones who generally cheered and supported the group!

Rob Martin and the team did the swim in memory of his wife Jane Frances Martin and another cousin, Jane Egan, but they also did it to raise money for Ovarian Cancer Action – and International Rescue Corps. A great days work for a man who couldn’t swim a length in January!