At the beginning of November an invitation was received by Admin from the UK Embassy to Armenia with an invitation for IRC members who attended the Spitak earthquake to attend a 30th commemoration ceremony.
On the 7th December 1988 an earthquake of 6.8 magnitude had struck at 11:40.
The death toll was reported as between 24,000 to 130,000 with at least 250,000 displaced persons.
It was the first and only time that IRC has put two teams into the field for an overseas mission.
As I am the only member who attended the mission and who is still in the corps, I agreed to attend, and the invitation was extended to Anne Marie as the late Willie McMartin was leader of the first team.
A programme of visits was arranged over the 2 days we would be in Armenia. 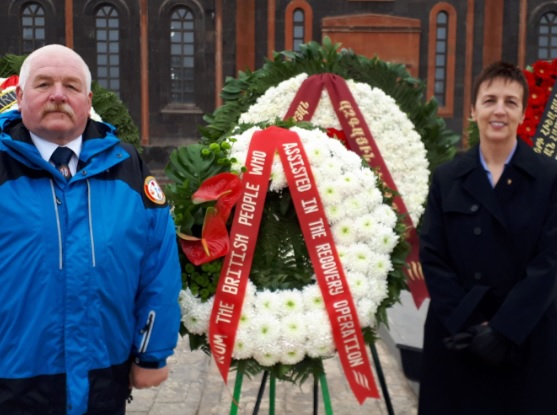 Leave Edinburgh 06:10 to travel to Paris, Moscow and then to Yerevan.
Arrive Yerevan 01:10 local time.

In the morning we visited the Ministry of Emergencies, Crisis Management State Academy. The IRC video was shown, Annie gave a presentation on our work in Spitak and other earthquakes. Followed by a question and answer session this was carried out with the aid of an interpreter.
After lunch we visited the Crisis Management National Centre. It was here while meeting the head of the organisation a presentation of medals was given to Anne Marie posthumously for Willie and to myself for our work 30 years ago. We had not been informed of this beforehand and it was a complete surprise. There followed a tour and explanation of the control room and a short visit to the INSARAG exercise that was being held. A short conversation was held with members of the UK Fire Service taking part before touring the excellent psychological facilities that are available to rescue workers and the public following major incidents.
Returning at approx. 19:00 for dinner before taking part in a television program at 21:45, this alongside Major Will George the UK Deputy Defence Attaché from the UK embassy.
Returned to hotel at approx. 23:00hrs

Another early start to travel the two hours to the Aemenaprkich church (Kiravakan has been renamed Gyumri) this is where the wreath laying was carried out. A minutes silence was held at 11:40 the time of the earthquake, the Armenian prime minister gave a speech followed by representatives from Russia, Germany & USA .
The commemoration ended at approx. 13:00. We then accompanied the UK Ambassador on the trip to Spitak to lay flowers at the memorial followed by lighting candles in St.Harutyun’s Church. The town has been rebuilt with buildings of no more than 5 storeys.
We returned to the hotel at approx. 18:00 and invited to dinner at 21:00.

We arrived Yerevan airport on the morning of the 8th at 09:00. We travelled Yerevan to Moscow to Amsterdam to Edinburgh. Arrived home at 23:00 local time.
There is a 4-hour time difference between the UK and Armenia. 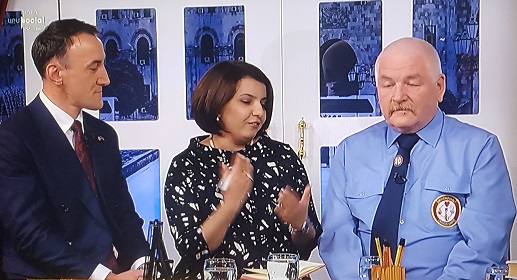 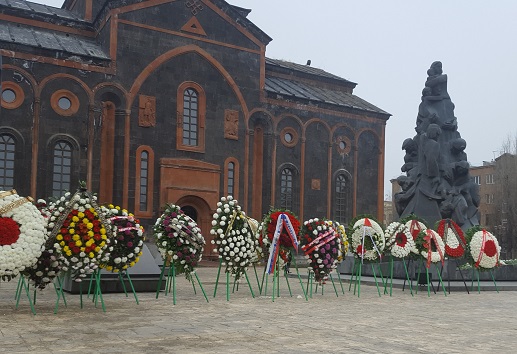 To feature any part of our stories in your own publications, please contact Julie Ryan on press@intrescue.org or call +44 7786 881 908