Skip to content
On Monday 23rd May, Scotland was buffeted by winds of up to 100 mph. Central Scotland suffered from 80-90 mph winds for periods during the day and it became apparent that many trees had been blown down as well as structural damage to buildings. 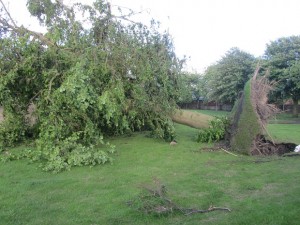 At approximately 1750 hrs a decision was taken that the Regional Organiser (Robert Barrie) would offer help to the Fire Service and the Local Councils. These offers were placed and the International Rescue Corps were told they would probably receive a call from Stirling Council in the near future.

1845hrs. A call was received from Stirling Council requesting a team be mobilised to attend a tree blocking Manor Powis Roundabout. He had little more information other than it was blocking part of the road.

The decision to mobilise a team of 5 was taken. They would take chain saws and ancillary equipment.
The team would consist of : 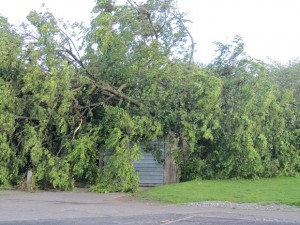 The initial attendance would be by the first 3 named with the others following if required.

By 1920 the first section had loaded the equipment and assembled at the store. They then proceeded to the incident.

They arrived at the location at 1955hrs and found a road closed sign. When they proceeded down the road they met the police who informed them that the road was now clear as two local farmers had mobilised machines and removed the tree. 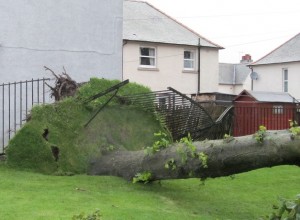 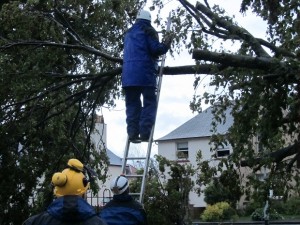 Stirling Council were informed and the team was requested to attend a Primary School, Park Drive, Bannockburn, where a large tree was blocking the gate. It required removal and making safe to allow the school to open on the Tuesday.
The team arrived on scene at 2010hrs. The gates were padlocked and this was removed to gain access.

The tree was assessed as approximately 70 feet (23m) long, it had collapsed across the gate to the nursery unit and also struck part of the building. The root ball was 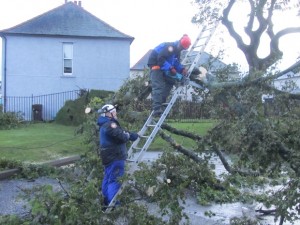 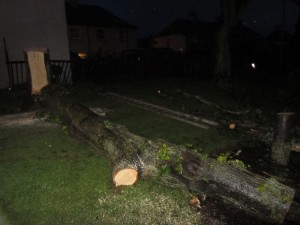 assessed as over 2 ton in weight and it had caused damage to the pathway of the next property. The boundary fence had also been partially destroyed.

The second section of the team was mobilised at 2025hrs and work started to remove the tree. With all the team working, the tree was cut, removed from the gate and made safe by 2210hrs.

2220hrs all the equipment was repacked and the Corps was requested to attend and clear the following roads. 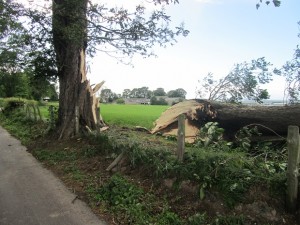 The Corps was then requested to attend the Main Road from Balfron to Killearn. The team mobilised but were stood down as a Council team had cleared the tree.
The team returned the equipment to stores and departed by 0130hrs on the 24th May for home.